Ok, this is turning more into a travel journal than a blog, hope you enjoy reading anyway! Here`s Albert`s part........ en español.

Everything was still wet from the night before (including my only head scarf and long blouse) and Rakhim`s invitation seemed like a message sent to us by an angel.  We must have looked like stray dogs, so we behaved like stray dogs.  A bit shy, Albert first mumbled something like "Oh, thanks.. ehh, at the moment it is not raining so, ehh.. but if it does rain, maybe.. ehh.." Rakhim must have noticed my desperate look.  He decided: Of course it is going to rain some more.  Dogs don`t know of taarof - we accepted the invitation.  (..for the explanation of "taarof", please read my post "Iran, Iran part one")
All this took place at an internet cafe, and since Albert wanted to finish whatever he had been doing, Rakhim went to do the groceries and we agreed to meet an hour later.

I stepped outside.. and instantly was pulled inside again.  Inside a bakery.  There were three women rolling out dough on very low tables.  One of them pointed at a stool in the corner, so I sat down.  I watched them do their work.  The dough was put onto something like a pillow and then pressed against the walls of a little oven which had the shape of a cylinder in the middle of the room.  The dough was so thin that the bread was done in less than a minute.  Another woman came and brought me joghurt and a cup of tea.  A huge pile of crispy, freshly-baked bread was put in front of me.  Eat, eat.. they gestured.  I wasn`t sure who was enjoying more. Me with the bread or the women who watched every movement I made with curiosity and giggled and laughed about my attempts to communicate with mimics and the few words of Kurdish that I had looked up and written on a little piece of paper. :)

Rakhim came and we left together.  Albet tried to do some small talk and asked him what he was doing for a living.  Oh, Rakhim replied, he had just been released from prison.  ..prison?  No smile, no hints.. Hmmm... we followed him the way that stray dogs do, with flattened ears in the hope of warmth, food and love..


Rakhim`s family welcomed us with excitement.  He lived with his mother and sister.  The house basically consisted of three empty rooms laid out with carpets and a seperate building for the kitchen, wash- and bathroom.  We took off our rain gear -which was instantly taken away from us- and entered the house.  In the next moment I found myself holding a towel in my hand, some clean clothes and a piece of soap.  Rakhim translated: His sister wanted to put our rain jackets in the washing machine. While I was going through step 1, 2 and 3 according to the rules of Taarof (just in case), Albert had already gone to his bicycle to fetch his dirty clothes (mostly everything).  I made a big but innocent mistake by telling Rakhim that I would prefer to not wash my rain jacket in the washing machine because of the waterproof blablabla...  His sister gave me a big smile, and began to wash.. by hand!
Ohhhh, nonono... ohhhh yesyesyes.. ohhh nonono...
Finally, we got the machine to start (ha!), and I tried to join Rakhim`s sister washing our rain gear by hand, but I ended up on the Persian carpet with a cup of tea.  No chance.

A big, wonderful dinner with some relatives followed.


No more stray dogs.  We were treated like a king and a queen!  Amazing how quickly the girls managed to make me up... ;) 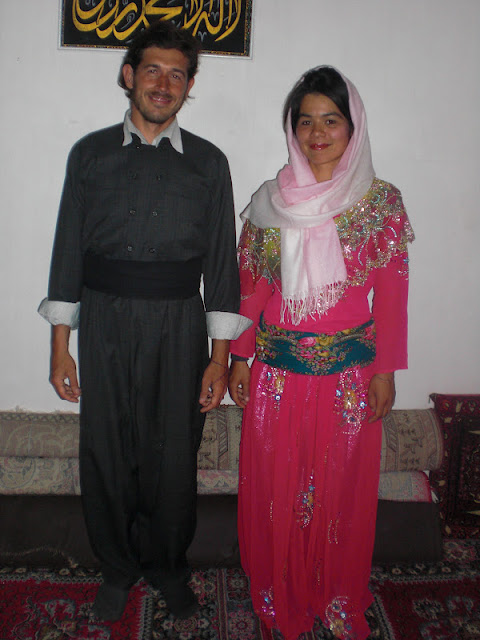 Woooow, what a mother I have :)   Life is full of surprises)


It turned out that Rakhim had been accused for being a spy and had spent a year and a half in prison in Teheran.  As we understood (which is not so clear because of language difficulties), he had gone on a kind of a pilgrimage trip to Iraq and when he got back, he got arrested.  Rakhim thinks the real reason for the arrest was his religious faith and that he was Kurdish (Kurdish people are Sunni Muslims in contrary to the government and the majority of Iranians who are Shii Muslims).  In prison, he was not allowed to pray with the rest of the inmates.  The family didn`t have much money to go visit him (even though transportation is very cheap for European standards..  the bus to Teheran would have cost only a few Euros..) When his father was sick and about to pass away, he officially was allowed to leave to see him but only if he paid a huge amount of money.  Needless to say that he could not afford it. It was a very sad story.


Because of his father`s death and Rakhim`s return from prison, guests were coming over every single evening, Rakhim explained.  And there they were.  In groups of 4 or 5, there must have been around 15 people at the end.  Each time new guests arrived, everybody started to speak at once, creating a steady level of sound that lasted a minute or two!  It reminded me of theater rehearsals of high school times: Standing in a circle, we would recite our texts in full speed, all of us at the same time..  Here at Rakhim's place, each person was saying prayers and greetings to each and every person, but all of them at once!  Then suddenly, there was silence and everybody sat down and the conversations began... tea was brought.. more tea.. cakes.. tea.. fruits.. and so on.

Men and women sat in different rooms.  None of the women spoke English.  To be honest, I was glad they didn't.  It was late -close to midnight- and I felt very tired.  Nevertheless, I enjoyed watching the women and girls interact with each other.  It was fun to listen to the sound of the new language.  I was happy not to be the center of attention.  At some point, they asked me to take off my head scarf to see my hair (which they seemed to like). They were making faces indicating that they didn`t like wearing their veils.  But none of them took them off for more than a few minutes.

Whenever Rakhim's mother or new guests entered the room, everybody stood up until she would give them permission to sit down again.  So the evening was a constant repetition of people standing up and sitting down, sometimes with a minute of everybody-greets-everybody.  Then Rakhim`s mother would leave the room to get something.  She returns and it all starts again... up, down..  up down. 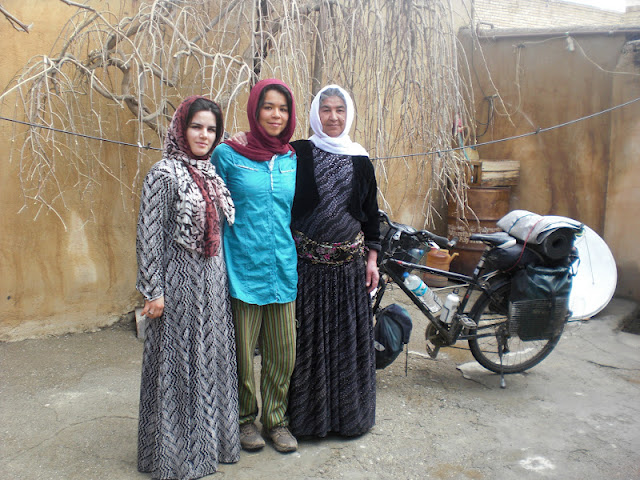 What a way to be welcomed in Iran..!!  In exchage of their hospitality, I gave Rakhim`s mother a shoulder massage which she needed badly... :(
One of their relatives accompanied us by bike until the exit point of the town to make sure we`d find the way out.
We were both very touched not only by their hospitality but also by how little fear they had of letting a stranger get so close to them, how they didn`t mind to get out of their way to have us there, and how openly Rakhim talked about his life, the family`s difficulties, and how all this seemed so natural to them.
~Iran.. to be continued